The stars have aligned for gold

Right now, we have the holy trinity in fundamentals for gold price growth. There are zero to negative real interest rates; massive money printing programs around the globe; and unprecedented geo/political risks. Indications are that we are in the early stages of a bull run that started during the second half of 2019. The last bull run we had in the gold market lasted ten and a half years, from 2001 to 2011. During that run, the price of gold grew over 600%; going from US$263 to just on $1,900. We have only just got back to that 2011 high in the last two months. So, while we have set an all-time high, I believe that this run still has a long way to go. There is no doubt there will be significant pull-backs from time to time, but the trajectory over the next three to four years, will be for gold prices to go higher over this period. Given this, I believe there is a very strong case for a family office to balance their portfolio with physical bullion.

Real interest rates are zero or negative in many countries. There are a number of countries in Europe that have negative bond rates. Gold prices are sensitive to treasury yields. If real yields are positive, there is an opportunity cost of holding gold. When real rates are negative as they are now, gold is more attractive.

At the moment we have a zero to negative real yields in the bond market. In this environment there is very little upside for bonds but there is significant downside if bond rates were to normalize at some future date. This means that bonds are not able to fulfill their normal role of balancing out risk in a portfolio. The gold market is tiny in comparison to the bond market. There only needs to be a very small movement of funds from the bond market into the gold market to have a massive impact on the price of gold.

A further tailwind for gold is that countries all around the world are actively trying to debase their currencies. Gold is paired against currencies and so when a currency is debased, the value of gold goes up in terms of that currency. Many countries are running massive quantitative easing programs and driving interest rates lower. The graph below shows the value of a number of currencies over time, indexed to gold. Unlike cash, gold is a store of wealth. 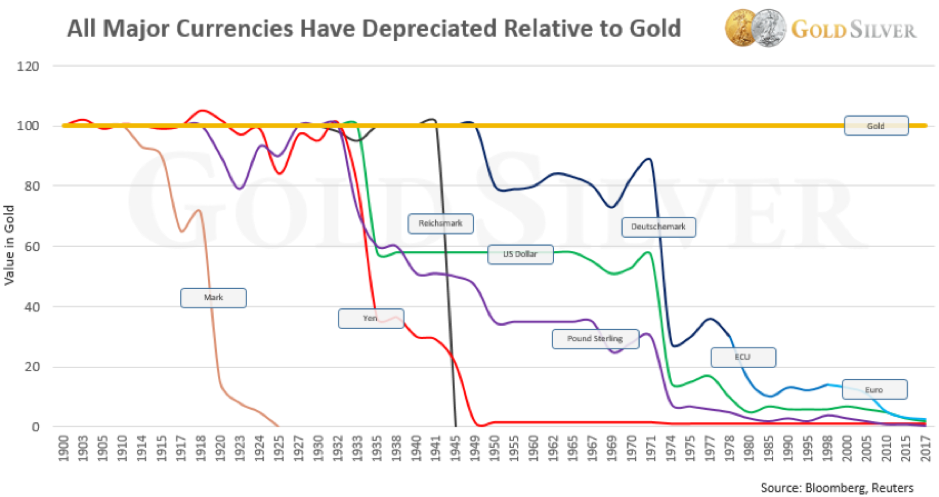 More than 60% of disclosed central bank reserves consist of US dollar holdings. The world’s central banks are buying more gold than they have in more than half a century. According to the 2020 Central Bank Gold Reserves (CBGR) survey, 20% of central banks intend to increase their gold reserves over the next twelve months, compared to just 8% of respondents in the 2019 survey which was also a massive year of purchases at 650 tons. Central banks understand that if the dollar takes a hit, the value of their reserves will fall sharply, unless they also hold assets that appreciate as the dollar falls. So central banks are buying gold as a hedge against the US dollar.

A third factor that will impact on the price of gold over the course of this decade are the significant geo/political risks that the world now faces. Right now, we have a once in a 100 years global pandemic crisis. This is now transitioning into an income crisis. There is real uncertainty as to how it will play out. The pandemic has accelerated some key geo/political trends that we saw at the beginning of 2020. US-China relations are transitioning into a tense rivalry. This has impacted almost every aspect of the relationship including trade, technology, ideology and defense. All throughout history we have seen tension and conflict at those times where an incumbent world super power is being challenged by a potential rival on the ascent. This will not go away any time soon, and will probably escalate.

In recent decades globalization has created opportunities, reduced poverty and supported peace for billions of people. Recently we have turned a corner where historians are saying that the current environment is similar to that of the early 1930’s. There is growing inequality both within and between countries. We are entering a phase of de-globalization. There are pressures on global supply chains, there is raising nationalism and an increase in protectionist policies. The US election will likely cause uncertainty and put pressure on social cohesion no matter who wins. The EU model is coming under pressure and there is some concern around their banking system. The world has never been more indebted which will make it hard for central banks to raise interest rates.

I would argue that now more than ever, family offices should hold some physical precious metals in their portfolios. It provides a counter cyclical hedge to balance a portfolio; it provides wealth protection and is an insurance against major family setbacks to preserve wealth over the long term.

Disclaimer: This article is an opinion piece and as such it should not be taken as investment, tax or legal advice and nothing provided in any materials by New Zealand Vault should not be construed as such. Before undertaking any action, be sure to discuss your options with a qualified advisor. The information in this article is based on the best research available to date, however due to the ever changing landscape of the world economy and the growing developments in world politics, this information may become out of date relatively quickly. Please verify all facts and get in contact with us if you have any issues with our content.